Hey all!
I hope that everythings going well! Today’s our first fun post relating to our Graceling read-along! Today, Erika and I are making our own personal character profiles! I just saw hers and the one I planned was super similar, but I guess that’s why our characters are friends! :) 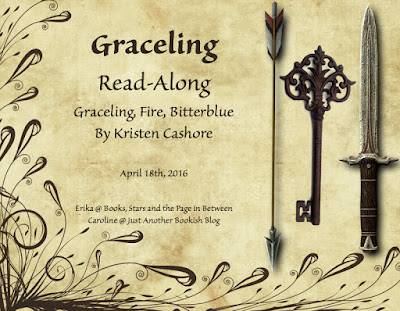 In case you guys just joined, don’t worry! We just started on Monday :)

Name: Caroline
Age: 19, almost 20
Kingdom: Lienid
Grace/Eye colors: I am graced with thievery - sneaking, staying quiet, picking locks, detecting traps... the whole collection. Some people thing I am also graced with flawless aim with a bow, but that’s just a hobby of mine, and I’m still not perfect with it. I have one violet eye, the other is gray.
Family Situation: I’m not sure about my family... some told me they were merchants. I do have an older sister, who is three years older, but she doesn’t have a Grace.
Occupation: I don’t really have an occupation. I mean, I have obligations and interests, and I sometimes go with the king’s army to act as a trap-detector, but otherwise, nothing much...
Relation to Characters:  If you have been confused about anything so far, here’s why. My sister is engaged to Prince Silvern, the 5th Lienid son. So I’m basically everyone’s sister-in-law-once-removed-to-be. I’m not really the super-rich-princessey type, but hey, at least there’s perks! I don’t mind all of the conventions, really, they’re quite nice in Lienid! Otherwise, Po and I are good friends, but I haven’t told many people about that... I taught Katsa how to pick locks on a basic level, because, surprisingly, that isn’t included in her grace!
Dream Goal: To travel and just help where I can. Actually, now that you ask me, teaching others would be amazing!
Other: Erika is like another sister to me. She has helped me so often, and we constantly keep in touch through letters. Also, some people call me Shadow just to get on my nerves. It’s not the worst, though, I’ve heard much worse.

And that’s it from my part! :D

Make sure to check out Erika’s profile and to post your own profile on your blog or in the comments! :)

Have a great day!
~Caroline