Hey all!
I just finished reading Graceling, by Kristen Cashore!
Erika and I have been reading the Graceling set for our read along! Make sure to join! :D 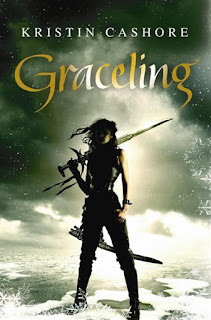 Goodreads Blurb:
"In a world where people born with an exceptional skill, known as a Grace, are both feared and exploited, Katsa carries the burden of a skill even she despises: the Grace of killing.Feared by the court and shunned by those her own age, the darkness of her Grace casts a heavy shadow over Katsa’s life. Yet she remains defiant: when the King of Lienid’s father is kidnapped she investigates, and stumbles across a mystery. Who would want to kidnap the old man, and why? And who was the extraordinary Graced man whose fighting abilities rivalled her own?The only thing Katsa is sure of is that she no longer wants to kill. The intrigue around this kidnapping offers her a way out – but little does she realise, when she takes it, that something insidious and dark lurks behind the mystery. Something spreading from the shadowy figure of a one-eyed king...”

For me this is a re-read, but seriously, this is one of my favorite books, hands down.

Ok so basically in this world people aren’t born with ‘powers’ in the conventional sense. Like no one can manipulate elements or fly or create things out of nothing. No, these characters have ‘graces’.  Think of them as skills that are magnified by a lot. Like let’s say you are good at singing, right? Being graced with singing means that you are more than good, more than exceptional. Or, like in Katsa’s case, you can be so good at defending yourself that it develops to a killing grace...

Katsa is SUCH a cool character! She knows what she wants (and it actually quite stubborn about it), but has little things that ease that out. She wants girls to be able to defend herself, and is ready to spend time and energy to teach them how to do so. She knows people are scared of her for her grace, but it still bothers her. She doesn’t want to marry or have children, but is open to ‘something else’ that doesn’t involve that specific commitment. And people are okay with that! She’s strong and goes to incredible lengths to get to her goals.

The politics involved between the different lands is not overly detailed, but is still unique and interesting. All of the lands are unique in their own way and show interesting connections to the others. The kings are all so different and strange, and almost every one of the main characters seem to be in the wrong kingdom for them, or want to escape it in some way.

The plot is interesting as well, with a dark king who can make people believe that everything he says is good and just, even though it is riddled with negative implications and cruelty. I mean this is a guy who tortures animals for fun and makes people think that it wasn’t him and that he makes good choices. I’m telling you he’s slightly crazy. He has a daughter called Bitterblue who is in danger of being harmed by him. Katsa and Po save Bitterblue from her fate, (and more happens that I can’t talk about here, check the spoiler section if you want).

Po is one of my favorite male characters. His grace - sensing things - is so incredible and unique, especially towards the end when it develops into something bigger. He is so sweet and caring and... fun! He is persistent and kind, with a light, happy personality, but knows when to tone down and be serious.

I actually just realized I have to go super soon!

Have you read Graceling? What did you think about it? Let us know in the comments!

I’m giving this a 5/5 feathers because it’s just that good!