I'm back at uni! Although I've been out-of-my-mind busy, I've been finding the time to read (and to play Dungeons and Dragons!) to make sure I stay, well, sane. I'm two days into my classes and already have a whole list of things to do!

However, I did finish a book recently and have some things to say about it. On Sunday I finished Finale, by Stephanie Garber! I absolutely adored the first two books, however the third instalment of the Caraval trilogy left me somewhat disappointed. In this review I shall do my best to try to figure out what happened, and to explain my thoughts.

Note: everyone is entitled to their own thoughts. I do realise that this is one of the most popular books of this year, with super high ratings on Goodreads! This review will also contain SPOILERS so read to your own discretion! 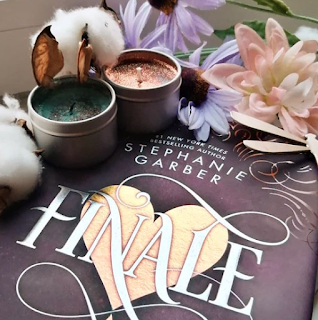 "A love worth fighting for. A dream worth dying for. An ending worth waiting for.
It’s been two months since the Fates were freed from a deck of cards, two months since Legend claimed the throne for his own, and two months since Tella discovered the boy she fell in love with doesn’t really exist.With lives, empires, and hearts hanging in the balance, Tella must decide if she’s going to trust Legend or a former enemy. After uncovering a secret that upends her life, Scarlett will need to do the impossible. And Legend has a choice to make that will forever change and define him.Caraval is over, but perhaps the greatest game of all has begun. There are no spectators this time—only those who will win, and those who will lose everything."

Finale ends just a little time after Legendary ends, and alternates between Scarlett's and Tella's points of view. Unlike the first two books, there is no Caraval during the timespan of the book. Instead, the coronation of Legend attracts visitors from far and wide. In the meantime, Scarlett is debating wether to give a chance to Julian or the man she used to correspond with, Tella is in the middle of a triangle between Legend and Jacks, and the Fates have been released and are slowly re-gaining their magic, causing some chaos everywhere.

Now, this book is definitely not bad. Stephanie has a way of writing that can enchant event those with a lower sense of imagination. However, I was disappointed with the plot of Finale, having read and adored Caraval and Legendary.

Let's rip off the band-aid and do this good-bad-ugly style!

The Good
As mentioned, Stephanie really knows how to build a beautifully magical world. Not only were her descriptions amazing, but the mythology she has created in her books, namely the Fates, was incredible. I couldn't get enough of reading about the Fates, their abilities and their actions.

Jacks, being one of these Fates, is honestly the single most intriguing character in this series. I adore him and his twisted mind, and believe that he deserved better in the end! His love for Tella just shook me to my core when he took her pain away and allowed himself to feel it. He could be a butt sometimes, sure, but still intrigued me from the first page.

I did love the Fated Items as well! the Key was super interesting, and the idea of the coins was fantastic as well! I would love to see Stephanie come up with a book of the Fates, full of their stories!

Also Scarlett and Julian were cute.

The Bad
This is where I must admit, I had problems with this book.

I feel like the end was just too obvious. Killing the villain seemed to be done far too easily, and wasn't drawn out enough. Scarlett and Tella's mother's death did not affect me emotionally at all. Scarlett's secret identity fell flat. I feel like every time emotions were meant to be drawn for me, I just didn't truly care.

Books are weird: the best ones make you want to cry, and the ones that fail to do so are less appreciated.

The Ugly
Some things made me want to just DNF it.

I feel like Scarlett's love triangle was nothing if not pointless. It started at the end of Legendary, and ended in the first third of Finale. There never was a contest, and her proposal to make it a game for her heart made me almost DNF the book at about 20 pages.

I couldn't stand Legend's obvious obsessiveness. He was immortal, and had refused to give that up until Tella just refused to turn immortal for him. (Except for once, when he then, for some reason, outright refused to turn her.) Once she refuses him, he makes what I believe to be an even more obsessive and selfish act by renouncing his immortality to 'have' her anyway. It was supposed to be heroic but I found it desperate.

Jacks's simple dismissal was sad. I want to know what happened to him, and the other fates. Were they allowed to live peacefully within the world? Were they trapped somewhere again?

There are many, many more things I could say about this book, good bad and ugly. However I do have assignments to finish as well!

Have you read Finale? What did you think about it? Let me know!

Dungeons and Dragons - My character got drawn!

I just want to publish a short post today because something made my messy day shine a little brighter - my Dungeons and Dragons character was drawn by a commission artist! Victtoria was doing a free commission giveaway and chose my character to sketch, and I simply adore the outcome! I truly encourage you to check out her website by clicking here. Her art is simply beautiful and truly affordable, even for student budgets! 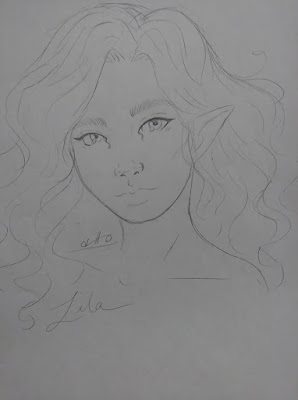 Tada! Isn't it gorgeous? I absolutely love how Victtoria captured my description of my character! I know I spoke of her in my last post, but I copied and pasted it here, to create a lovely little character profile.
No comments:
Newer Posts Older Posts Home
Subscribe to: Posts (Atom)