A Conjuring of Light, by V.E. Schwab

I just finished reading a Conjuring of Light, by V.E. Schwab! 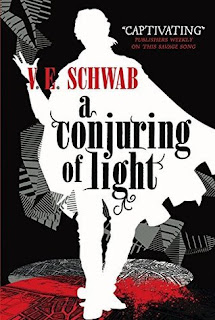 "The precarious equilibrium among the four Londons has reached its breaking point. Once brimming with the red vivacity of magic, darkness casts a shadow over the Maresh Empire, leaving a space for another London to rise. Kell begins to waver under the pressure of competing loyalties. Meanwhile, an ancient enemy returns to claim a crown and a fallen hero is desperate to save a decaying world…"

I would like to start by saying that I didn't know what I was getting into when I read this series, but I knew there was a huge hype surrounding it. I really enjoyed the series as a whole! The world, the magic system and the story building was incredible. The characters spoke to me, each for a different reason. I have reviews of the first two books of this series up from last year!

From now on, I'll be mentioning spoilers. If you have not read this book, or any of the other installments, I would suggest coming back another time!

I'm going to review this in a set of points rather than how I usually do it - I really wish I could actually make a video for this because a lot of feelings I have are difficult to write in words, but I'll do my best!

Going through the book, I actually started taking notes! Granted, most of these notes include things like "Rhy please don't die" and "Kell I love you but you're an idiot sometimes" and "Lila has a deathwish but they would all be dead without her", but that already should be able to give you a nice overview of A Conjuring of Light.

So we start with the confirmation that Lila is an Antari - something I had figured out the minute she said she had a fake eye in book 1. But this acts as a key to unlock a whole load of really good plot devices and creates a whole trust triangle between Kell, Lila and Holland.

Holland became a lot more understandable in this book. I won't stretch it to say I love his character, but you can completely sympathize with his past and can really see his motives and reasonings. The three Antari balance perfectly!

This book has a shadow cast over Red London, full of dark magic from Osaron, who wants to rule once again. This was an interesting concept as the darkness had a different effect on different people, depending on their relationship with magic. Antari are immune, as are people related in some way to one. Some strong magic users absorb some magic and become 'silvers', while others turn to ash completely once they let the magic it. It was so sad when Calla died, but I really enjoyed it when Alucard became a silver.

Alucard quickly became one of my favorite characters. He always seems very uncaring... until someone he cares about is in trouble. Then he becomes the sweetest person in all of Red London, the most attentive and the most protective. He and Rhy are really sweet together, I must say!

I also love Kell and Lila. His steady nature and her fire are really complementary, and I love 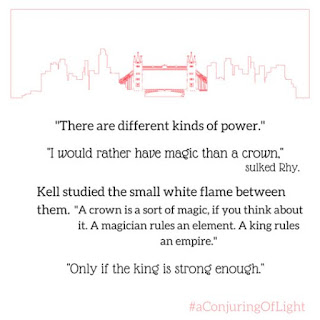 how they keep saving each other I'm so happy that they're endgame with each other, and that they go explore the world when the book ends!

About the ending of the book, I thought it was phenomenal - there were no major deaths, and the world got restored to a better state.

The only thing that bothered me about this finale was the fact that, even though they were touched upon, there was no explanation as to who Kell was in the past. There was a mention as to where the jacket came from, but not what KL means, or about his real parents. I kinda wish the same idea was explained for Lila as well!

The intrigue in this book was really great! I don't want to go into too many details, but it was a wonderful mix of politics, magic, belief in ones self and societal ranking. There were several points that amazed me, while others didn't come as much of a surprise.

My for my final point - I appreciate the fact that Rhy never died, I really do! But he really should have died so many times! Kell's link that kept him alive could have broken somehow, or maybe after escaping death a certain number of times it starts to fade. Instead, there were situations in which is body could not possibly have survived an event, yet Rhy lived on. I feel like that pushed the immortal card a bit too far.

I could talk about this book and this series for a long time, but then I'll start rambling too much.

Have you read A Conjuring of Light? What did you think of it? Let me know!