Hey all!
So yesterday I posted my review of The Curse of the Sphinx, by Raye Wagner (Click here to get to it). I am honored that she answered some questions for me! So, without further ado, here’s the interview! The answers have not been altered. 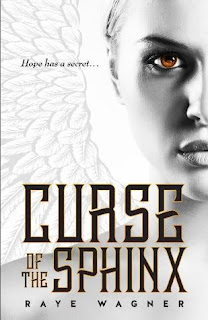 Thank you so much Raye for answering these questions!

1. What sparked your interest in Greek mythology? Was the story inspired by anything in particular? What made you start writing?
I had a friend in college that was an artist that painted the Grecian Sphinx sitting atop a cliff with the bones of the men she'd killed scattered about. I've got a print of it that hangs in my home. When I read Battle of the Labyrinth (PJO #4), it was almost a personal insult to have the Sphinx be a game show hostess. The idea of a cursed girl trying to fit in, but limited by a god's curse dropped in my head. I actually called my sister and tried to convince her to write the story. She insisted I write the first ten pages and send them to her. That's when I started to write.
Writing fiction is distinctly different than my day job in healthcare (where documenting EVERYTHING is really important). It took a while, and some very patient editors, to learn a better writing process.

2. The Sphinx is known in both Greek and Egyptian mythology - why did you decide to focus on the Greek side?
I did a lot of research about the Egyptian sphinxes and both Djedefre and Kafre (the first two pharaohs with Sphinxes- the latter is more well-known). There are sphinxes in Indian, Asian, and even European cultures. I have a prequel novel that pulls a lot of the lore into one mythological tale.

5. If there is one word you can attribute to Hope, Athan and Haley, what would they be?
Hope is naive and a tad awkward. Athan is misguided. Haley is sincere.

6. The open-endedness of this book suggest at least a duology - how many books are you planning to write in this series?
There will be four books in the Sphinx series with Hope's story. There is a prequel novel, as well as the novella already published. There will likely be a spin off book or two as well.

7. Do you like reading as much as you enjoy writing? If so, what book/series would you recommend?
I love reading. Heaps. My favorite comedic series is the Georgia Nicholson series by Louise Rennison. I loved the first three of The Mortal Instruments, and I loved the Infernal Devices. I loved the Scourge by A.G. Henley and the Runes series by Ednah Walters.
There are a group of YA mythology authors (both traditionally and indie published) that have formed a fan group on FB called MYTH 101. I can vouch for all the authors there. So many fabulous reads!

Make sure to check out The Curse of the Sphinx! It is now available on Kindle, and you can get to it here, as well as in paperback! It’s really worth the read, and the second book should come out later this year. :) Make sure to add it to your goodreads lists!